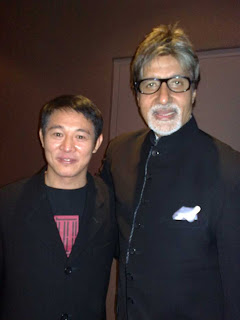 Respected Brother,
Sadar Charan Sparsh,
I agree with what you had to say of the weather in London, I had twice had opportunity to be with my younger sister that she could not get to her hospital with so much of snow around, I did myself had a glance of original snowafall on her webcam. I just forgot to tell you of those pictures you had sent earlier, I thought they were from Davos. It is OK, we experience the same things despite the fact that we were in two far too distant cities of London and Mumbai.
Today I present one of the first couplets for my interpretation- Tjhis is a saved work and aslo a bit of editing has also taken place yet I do not mind such concerted editing when a work is being transfered from paper to the memory of the computer!
I should not hold and get into a long foreword. I must say that I did like your - मेरी यादों के बाबूजी That was quite anice peice of writing in Hindi. I also loved to read the few more couplets that were added at the golden jubille of madhushala in 1985. Ok, I appear to be dragging too much of the target - here comes the first transcription
.

Oh my friends come have a look
What fate has scrabbled on my book!
Tis too close and yet too far away
Ever disappearing that tavern on the way!

This friends was a sort of not so literal yet somewhat lyrical transcription of how this particular verse could be anglicized for rest of the world. Its interpretation may or may not be too close to what I have paraphrased above. Time and again I remind myself of the great inadequacy that persists in a translational effort. What follows now is my understanding of the original verses. Frankly speaking this computerized version is already showing some signs away from the one scribbled on the pad with pen! I do not desist away from such a path as long as I do not complicate the issues and make a mess of the work. The basic idea what Dr. Bachchan probably would have conceived in his mind is discussed here.

There are situations in life that reflect incompleteness and unexpectedness of an event – as if the cup slips away before eager hands could get hold of it! Or rather tumbling of the wine even before it could just embrace our lips!
The poet then insists in spite of these fallacies and failures he invites his friends to have a close look at this desperate beauty of his deserving/ or undeserving fate. That he has missed a very near chance to have glance of the tavern on the way!

This again friends is more or less physical meaning what Dr. Bachchan has referred in these lines though he might actually be trying to philosophize the element of uncertainty and the unexpected from our perceived and preferred path and to be prepared for such eventualities. That many a times we are so very near to our target yet we miss it by a whisker, that we are so close on the verge of success yet somehow it deceives us in the most unexpected manner.

The Poet, I mean, I should say Dr. Bachchan is probably addressing the rest of us the populace on this earth to believe that his own story of dwindling fortunes and discomforting events could not be different for us human beings in any way. His near misses on finding his chosen path (Tavern) and to succed on it is like a mirage too near yet too far away!

Post Script:
With this first interpretation of the thoughts of Dr. Bachchan in Madhushala - though actually the 94th verse of the poets poem I begin this journey to communicate with the rest of you. I wanted to take up something that I had not read in the train and I must add here that following sequence may never be important to me and you may find that before I complete all the verses I might have revisited a couple of them many times over! This particular couplet reminds us of uncertainty that we all must really respect.

I would also wish to make a point to the poet to forgive me if I ever fail and at times completely misunderstood his work or words and interpret them in not only a different manner but also in content and context. The beauty of a poetic work lies in its manifold manifestations and also strongly depends on the mood and mind of its reader at that particular point of time. The message could be seen and read differently as if there are not one or two but several messages hidden within. The same poetic work can have different meanings, be understood in different manners and different individuals could derive different messages at different times. I use this philosophy to defend my incapacity to treat the works of Dr. Bachchan as exactly as science would have loved it to be!

Hopefully, I am able to provide enough of such couplets that could prove the Madhushala to be only as the tavern on the way! Here Madhushala symbolizes with uncertainty in life!
Posted by Abhaya at 9:58 AM