The Curious Case of Praveen Kumar 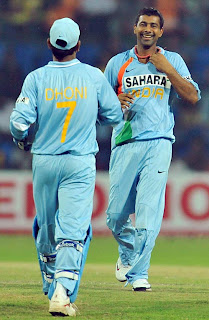 Dhoni- Why Praveen Kumar is being rubbed the wrong way!

If I have some interest in the game of cricket I see that undue keenness is shown in keeping Praveen Kumar from being given adequate opportunities to play for country in the T20 and ODI games that the boy actually gets. That he is good shoul become evident as yu read further.

If his performance is any yardstick- I find him a genius if not an outright outstanding bowler. Look at these figures which speak volume about his capabilities.

I do not have to tell the readers and Dhoni that his statistics would have been much better but for one poor series in the Asia cup on a true batsman friendly wickets, where in 4 games he was thrashed for 174 runs that he still maintains a good average and a healthy economy rate goes to his credit.

I see this as a move to promote only players who are belonging to the likability of the captain and selectors. I take strong objections. If he does not get to play every ODI in NZL it would only prove my point further that some conspiracy is definitely being hatched by BCCI-Dhoni nexus against him. Is there no one else other than Abhaya Sharma who could champion his cause for inclusion in the Indian side after such stupendous bowling figures.

Do not worry Praveen Kumar, IPL is coming up and you will have yet another chance to prove your worth to be a permanent member of the team India! Best of luck for inclusion in the complete ODI series and a good run with the ball and the bat! Don’t let this opportunity slip otherwise BCCI might prove me wrong! Jay Ho