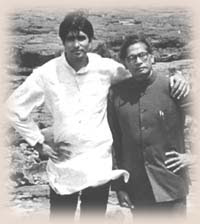 Like father like son, that phrase befits you in totality if not in individuality. As I read these descriptive work my mind takes me back to Dashdwar se sopan tak - the accounts of European tour of Dr. Bachchan when he was with the ministry of external affairs and later as Rajya sabha MP. The diference is that he wrote in Hindi and you use the international english! Time and again I remind myself that language could seldom be a barrier to expression, over and again I find that a lot depnds on the audience, readers in this case. What you have to offer must not only be succinctly designed and executed it should be consumable for the people for whom it was meant. It is this later philosophy that brother seems to apply believeing most of his readers on the blog are more comfortable with English than the local Hindi. It is also the reason that many a times I try to put forward the english equivalent of Hindi outings on the blog! Yet should I desist from the use of Hindi. I am not Amitabh Bachcan who probably can not take enough time out of his busy day’s schedule to use two languages.
Very heartening to read your vivid act of storytelling, no wonder, Dr. Bachchan and to some extent Mrs. Teji Bachchan have imbibed some extraordinary good habits to be able to share your life is not a mere exercise of puttiing across one’s feeling it is more of an introspection of the self. To keep one grounded firlmly to the earth amidst the tall achievements could be so very true of Amitabh Bachchan - the genius.
I would like to comment here that perception of others is not in our control, so I see little logic for brother to defy every time someone in the media or elsewhere writes something that is not the plain truth. Ones own knowledge of the truth should keep one in good stead and truth prevaisl in the long run. We all know that today the movies are commercially exposed to a great extent and sometimes we start taking the plunge without realising if a movie is really worth all that extra expenditure. Advertisement is not bad in itself, otherwise how would the world at large know of the product yet too much of it could kill the cat. We were very fond of the posters of Amitabh Bachcan on the streets on the hoardings as that alone announced that a new amitabh starrer is in town. many a times there were three to four movies in a row and it gave us a satisfaction that our rating of Mr. Bachchan as the best was equally felt by the producers and directors of Hindi Cinema.
Muqaddar Ka Sikandar had bowled my Mauritius friend Ujay Bheenick the footbaal player so much that he must have seen the movie a number of times. I still remember that he asked me to write down the wordings of the song in phonetic english so he could sing it. I know he sang it quite well without probably ever understanding the exact words - the song brother and folks was -
O saathe re
tere bina bhi kyaa jeena
tere bina bhi kya jeena
I think there are millions of Ujay spread not only in Mauritius but across the globe who believe in these words and would not offer to you as the token of their love for you! I am included in that list. I too remember this song and all the songs of Kabhi- kabhi, Don and even Mr. Natwarlal and majboor besides several from your movies that I used to sing at the festival and marriage times. Now I do not get to learn the new songs, it could easily be the attack of age I do not say that there are no good songs today, I am past that age!
There is going to be a marriage in Delhi on the month end of my niece Sonal, it would also be time to meet Dr. Shashank who studied medicine here in Mumbai’s Nair before going to London and settling in Australia. Some like my younger sister in London and Nephew and niece in US may not be able to make it to the show, I will miss them, yet for a huge family like ours there would be many who would attend and these days only such events bring our huge family together, everyone is so very engrossed in their own details of life! Earlier, I wanted to fly to Delhi but for the weather and the rising expenses decided to travel by August Kranti.
I put brakes on my persoanl accounts and wish you a very happy working schedule at Pune!
Abhaya Sharma, India, January 20 2009 08:54 Hours IST
PS Friend and fellow who took the American elections like a storm The indomitable Barrack Husein Obama takes the hottest seat of power at White House. I call him friend in the same spirit as I relate to you as brother. I would pray for Obama to reach beyond the expectations that he has raised, if he could achieve half of what he urged during his campaign world would be a different place and definitely a better place too! Long Live Obama, long live america!
Posted by Abhaya at 7:29 PM