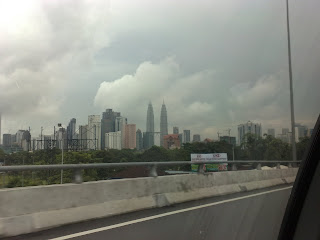 .. but what really took the cake was the Immigration officer at the desk breaking into our National Anthem the moment he saw our passport !!

Such is your nature that People world over identify you with India and the anthem in a way to greet you could only mean some respect for you and the country of your origin, the country of your birth, the country where you achieved so much, the country which respects you a lot, the country you most care about! Oh! There were other kind of experience that you had to undergo could only have heightened the sense of pride in you. The co-passenger and the immigration officers are tow sides of a coin, no, no, not the coin you used in Sholay! The real coin that we all define as life. In a way, I feel that the experience with the co-passenger actually he could only be called a co-traveller that he chose to seat himself away from you soon after! it must be a great move of the almighty to give you the taste of some pain! I understand the gains after the pains give us double the happiness, may be I remember the couplets I recited here few days back, I think recited would be wrong to use -

Who could better understand this than you, the one who was summarily rejected to begin with had covered a distance of 40 years with towering story of success in more than ten films. generally people are happy with one or two great performances in their career, you have more than 10 such movies which cast you into the super actor category- I am not the one who like to use the word superstar. As much as I do not like to call Hindi Cinema industry as Bollywood - that is an altered ego- that is a state of unoriginality - a term that is superfluous.

For me the sequence of events in your arrival and later should put you in right perspective of mind- that life too has two sides of a coin - A success without struggle and the happiness devoid of trouble is really unimaginable!

I am convinced that you would be able to concentrate far more better in such serene atmosphere to configure the foreword for Madhushala - Brother I have never asked you of any favours nor would i ask after this - If it could not mean asking for too much, I would rather love to have a signed copy of your foreword alone to the coffe table edition of Madhushala- I know the complete book would be priced too heavily for me to be able to buy and I would not be able to accept it as a gift. There are thousands of other who deserve such favours from you before me!

Oh! I must say that the moment I knew that you were going to be in KL I was anticpating some beautiful picture from the cameraman - Amitabh Bachchan, and you did ! Is there some connectivity between us, I do not discuss these things with anyone yet you are coming up with almost as per my expectations on quite a few occasion. Wonderful pictures - I would definitely use some of them ! Brother, I forgot to ask you whether these pictures have some sort of copyright by you or others! If I would have ever used any material belonging to you on the blog it is out of sheer love and not for making any money out of it!

I may or may not be able to contribute to your birthday book being planned by some of the family here on the blog, Do I need to contribute separately when you are always in my thoughts and when I have so many avenues to reach you. Our physical or personal proximity or even a face to face coexistence had never been my kind of attachment to you! yet I would make a sincere attempt to be part of such an exercise to express that I may not be a fan or a follower yet I love you a lot and also I admire you a lot! I have been blessed or rewarded amply in being a regular member here and having got a huge number of friends who contribute to this blog besides you! I do not want to belittle their contributions by naming a few individuals, that would be injustice to several others who would have been a victim of my poor memory skills!

It is cricket game tomorrow and I wish India does not play dilly-dallying approach like what they did in Sri Lanka after winning first four games! I wish Sehwag is not rested in tomorrow's game as we would all love to see him in action when he is in the form of a lifetime. I would not be surprised if he crafts his innings well and rains do not play a spoilsport- He could well turn out to be the first double centurion in a One day game in the world! he will need to maintain a good co-ordination between aggression and refrain from sending every ball to the or over the ropes. That task should this time be assigned to Yusuf Pathan who should also get his chance to bat higher up the order, may be at number three or a number four!

Virender Sehwag is known to prove everyone wrong after his dismal performances for a long time some one and half year back. When everyone had written him off I had charted a poem on him- that was more as a reaction to the comments of Bedi sahab and Mr. Sandeep Patil on Star news. the poem probably is available as a link on angelfire site. The link to the article may have been lost! He is really the Swashbuckling Sehwag - that could well be an apt title for some book on him or even a coverage on Celebrity- that I wished you could take up to anchor! I will not force anything upon you considering your extremely busy schedule! I do not know if you have the arrangements to watch tomorrow's game or probably you may not have time for a dead rubber game. For me cricket comes next to Cinema and though I particularly relish the T20 version, ODI's have got quite a positive impact of the T20s and become much more interesting than in past!

Here may I add for the foreign family members that India is deeply in love with the game of cricket and it was purely for the individual talents of first Sunil Gavaskar, then Kapil Dev and finally Sachin Tendulkar. There are also lot of other cricketers who have been around and have won the hearts of Indians especially the Chandra-Bedi Prasana trio of spin attack, Eknath Solkar at forward short leg, Viswantah, Vinoo Mankad and now Virender Sehwag with their exceptional talents. It would be a great loss if IPL suffers due to political or for security concerns. Cricket in India and Pakistan I had written somewhere is like a religion! I add that after the current form of team India its a big national achievement at the International level. I do not believe in rankings becuase india was nowhere in the ranking system when they first won the world cup in 1983 beatibg the mighty West Indies and later went on to win the first ever T20 world championship in South Africa under the newly appointed captain in Mahendra Singh Dhoni.

I am convinced India would not like to loose the momentum unlike in Sri Lanka they have to play thre test matches as well! Another win tomorrow could prove our ro be huge psychological advantage. I would not suggest any team combinations to MSD, he is doing pretty well as of now! Yes, I would watch the first half of the game and later follow it on net! We at BRIT work from Tuesdays to Saturday.

Have a wonderful time at Kuala lumpur and keep us posted with the news and views of KL and Paa..