Alop Bhaisahab - I love you.. 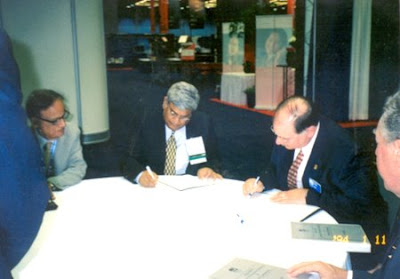 .. What I’ve learned over the years is that learning to accept each other’s faults - and choosing to celebrate each other’s differences - is the one of the most important keys to creating a healthy, growing, and lasting relationship.

Yeah, I get a feeling that I could once in a while break the jinx and address you as a friend too.. I know you would not mind..

In relationships they say when the shoe of father fits his son's feet .. he should consider him more as a friend than a son..

We are not related by blood.. but I ask myself whether only blood relations count in our existence and I answer back t myself.. not necessarily.. sometimes even if that sometimes have low probability.. some relationships can beat the best of blood relationships.. No, no, I am not saying that I have established such a relationship with you.. I am only trying to drive a point home that there are several such relationships that one develops as one grows up.. some do assume a greater significance.. some go ahead to become even more valuable than what a blood relationship could qualify..

To put some substance in my observation.. I recall a relationship with the two Mittal brothers that my family has been enjoying over more than maybe 50 years.. the Alop and Amogh Mittals.. These two brothers were initially a friend to some of my own brothers.. their house was opposite to the Baidyanath agency which my Nanaji had in Bijnor.. the two might have been known to my family since those days.. probably one or two of them might have also studied at some level with one or both of them .. most likely at school.. or even college level..

There has hardly been an important ceremony in my family that the two would have missed.. the Alop Mittal .. the one confined to a wheelchair for last twenty odd years still manages to do so.. is a perfect example of good relationship.. how the relationship grew so strong over the years is difficult to gauze for me now.. yet I can say without any iota of doubt that it indeed is very strong..

Alop Bhaisahab was in Bombay too before I made an entry to the city.. He served in various high positions in Toshniwal brothers, SIMCO international and today is the advisor at FICCI.. needless to emphasie his standing in the country as an intelligent and important constituent..

So what I was saying.. that the relationship with Mittals is one such example where blood relationships loose to friends to the family.. I salute Alop Bhiasahab who despite his severe bizarre accident in which he had lost his daughter Jhalak and he was destined to the wheelchair.. I did go to meet him at Bombay Hospital during those days.. and also went to see him at Khadakvasala where he did undergo some further treatment.. What is highly admirable of him that he continued his life with the same zest.. and continued to rise higher and higher in his list of achievements.. I wish Alop bhaishab the very best in life.. he is probably more dear to me than the brothers because of whom I know him.. Ours is not a blood relation yet he clearly stands much above those types of relationships.. Bhiasahab (Alop Mittal) my very sincere Charan Sparsh to you.. wherever you are.. I seek your blessings as always..

So much for him and his association with us.. I love him.. may be a shade more than I love you brother yet my love for you is also quite high for another reason.. that you are the son of Dr. Harivash Rai Bachchan..

I am thankful to my mother.. that she had sown the seeds of such high values and traditions into us to be always respecting our elders.. not in the family alone but elsewhere too.. to learn from their deeds as much as we could do.. Thank you mummy ji.. I was watching Raja aur Rank yesterday on DVD and it had such a wonderful song..

I know that was one of my favourite song and what a pleasant surprise that had to wait till April 10 2009 to see the movie first time to enjoy my relationship with my mother.. a gem of a person.. a too much of a scholar.. a mother in all its integral meaning.. I now do not miss her so much after 27 years as I felt during first few years after her death in 1981.. that I now know her best wishes are always with me.. always guiding me to become a good human being..