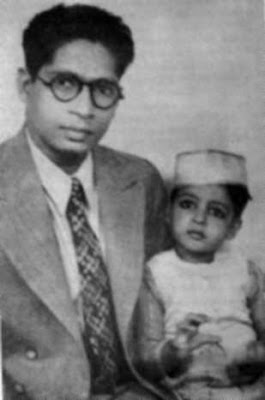 Dr. Harivansh Rai Bachchan was a professor of English at Allahabad Univeristy. In the third part of his autobiography – Basere se Door, initially he recounted his days in the university’s academic atmosphere, the professor and lecturers he had worked with. Among these the prominent were Professor Deb and Dr. Dastoor, who according to him were equally brilliant yet only one man could be the Head of the department and that post went to Dr, Deb for his seniority in the department.

Dr. Bachchan also raised the oddity of age and knowledge in assignments given to the university professors and questioned its validity! Dr. Dastoor was made associate professor to which he had sarcastically equated to be an Ass. Professor and also suggested that the post should have gone to Dr. Deb as he was also to bear the extra burden of management skills of the department. That Dr. Bachchan respected and enjoyed the atmosphere a great deal is evident from narration of the various limericks that were doing rounds in those days to describe the professors. He had described Professor Deb thus –

Professor Deb was the same in length and breadth
And a man of encyclopedic depth
He was also humble to a fault
And humbler with a somersault
He could talk of hafiz, Honolulu and Halwa in one breath

And again while describing Mr. Bhagwat Dayal he writes that one of his friend had composed the following–

There was a man called Dayal
He was proud of his English style
And prouder of his prose
But proudest of his nose
That made him look like a gargoyle.

There was this Raghupati Sahay Phiraq, whom the world of Urdu literature knows more popularly as Phiraq Gorakhpuri. He had described Phiraq sahib as the most versatile actor, he could turn and mould his face in so many different possible ways that any actor could hardly match his skills. Though Dr. Bachchan did not completely absorb the characteristic nature of Phiraq sahib yet he opined that he if would not mind spending hours together with some person it could easily be Phiraq sahab! Phiraq gorakhpuri friends was a brilliant scholar of English language is a fact that few would have known.

Dr. Bachchan’s this part of the story is a preface to his England days when he went to Cambridge for a doctorate on the works and world of W.B. Yeats.

These were some of the excerpts from my readings that I had promised I would share with fellow bloggers as and when I get time during my reading of his autobiography. These might just be common observations yet the way Dr. Bachchan has put them across in the first 20 odd pages can only be enjoyed from what he had to say of these times. I have just introduced the readers with a pinch of it. I am afraid if English translation In The Afternoon of Time contains these anecdotes in as much detail and depth. Till the translation of the autobiography of Dr. Bachchan becomes available in English folks knowing Hindi alone can get the poet’s versatile account!

I must also add here that I have not finished the first part and I am now reading the two parts – the first and the third in parallel. I really appreciate the way Dr. Bachchan has encompassed his life in these volumes. I am yet to touch upon the fourth part – Dashdwar se Sopaan tak, and I must also add here that I had finished reading the second part Need ka Nirrmaan earlier. The paucity of time and existence of an unplanned day makes it very difficult for me to get to read faster than my present pace! I do intend to initiate the fourth and final volume before his 101st Birthday on 27th November.

Hello my dearest Mr.Sharma..
I'm so happy to receive a message from my sweet prince Amrit.. i sent him a message.. i hope he has the time to read it..
I had uploaded my photographs to my Facebook profile.. if you like to see what does little chubby reeham look like.. please visit it.. hope to hear from my little prince Amrit oon to send him the pictures and paper currencies soon..
I wish you and your dear family all the best..
Have a great day..

Hello my dearest..
I'm so sorry to know that you had fever... are you o.k. now..?? i hope you are getting better and that you and your dear family are always fine...
I'm so sorry about the latest accidents.. very horrible and i do admit that i feel sad and angry for all these accidents... god protect and bless you ...

I have great regard for all friends on the blog but for some reasons I have taken a stance to write only in Hindi on brother's blog!

I hope I would get time to share important things with all of you over here!

Abhaya Sharma,
PS I will send you the details of my postal address for minor gifts to Amrit for his coin collection! I will send you an email at facebook or directly write to your email ID, Honey, There is no hurry!